(I wrote this article for Executive Women International, but I thought I’d post it here too – seemed relevant) 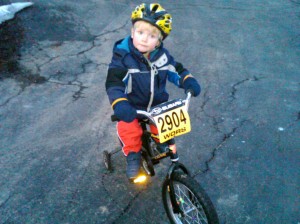 Anyone who knows me, knows that I love to ride bikes.  Now that my cycling season is in full swing, it’s been a while since I’ve written any (business) articles.  But I came across an old article from 2007 that sparked a thought today…

Pre-1990, most kids had a bike by the age of 6, and knew how to ride. A bike was their first step toward independence.  Trips up and down the driveway quickly gave way to trips down the block, and suddenly the world was a whole new and wonderful place.  Cable TV was still relatively new, and pagers were something that only doctors carried.  The daily world view of adults was limited to the nightly news and the newspaper.

Occasionally, something bad happened, but that was the law of averages, and it usually happened to someone else’s family.  Mother’s would lean out the back door when dinner was ready and yell for their kids, and minutes later they would appear – fresh from hunting frogs or whatever the other innocent mission of the day was.  OK, maybe that’s a little “Beaver Cleaver”, but not too far from the truth.  This gave our children stronger self images, a greater sense of optimism about the world and its people, and a truer sense of their own unique identity.

Fast forward a mere 20 years, and we live in a constant state of paranoia.  Cable TV, the internet and the fact that we now have access to everything, everywhere, all the time has practically driven parents off the edge.  Every stranger is a child molesting murderer, ready to snatch up our kids the second we glance away from them.  We have replaced “play” with “play dates” and structured activities from sun-up to sun down.  We make sure our kids are safe by mandating helmets, not keeping score in kickball and… providing them all with cell phones.
Technology once reserved for NASA, government operatives and on-call heart surgeons now feels right at home in grade-school backpacks, shielded from the elements by “Chowder”, “Flapjack” and “Hello Kitty” covers.  Everywhere we turn we see and hear about the worst horrors of the world, and it’s our duty – no our natural instinct – to protect our children.  If only we could watch them all the time (video baby monitors), or know where they are (GPS tracking) or at least be able to call them and check up on them (BINGO!).  Every parent I talk to that buys a cell phone for their kids says the same thing:

“I just want to be able to call them…”

And your kids are 3 steps ahead of you.  THEY want phones so YOU can call them too!  Right.  The minute after your child gets his or her first cell phone they will have downloaded custom ringtones, snapped un-flattering pictures of siblings and sent out 563 text messages.

Here’s where the author of the article I read and I part ways; he gave his 7-year-old a cell phone.  His claim was the reasons I stated above: the world is a much better (safer) place now that Johnny has the new Motorola Zipper Zapper (insert flavor of the day here)!  My youngest kids (4 and 10) do NOT have cell phones – they have bikes.  They don’t have a computer at home – they have freedom to go outside and see the world through their OWN eyes.  I love my kids, and I would sacrifice my life for theirs in a millisecond.  They don’t need a cell phone, they need a strong sense of purpose, a strong self-image and the empowerment to make mistakes.  I need to do my best to let them be people, to let them grow and to let them follow their dreams.  I believe that if they are so insulated from reality that they don’t have the intellect to make the right decisions if (God forbid) something terrible would happen, a cell phone is not going to help.

Someday, when they are older and we all agree that a cell phone is a useful tool for them, they’ll have one.  I’m not looking forward to it.