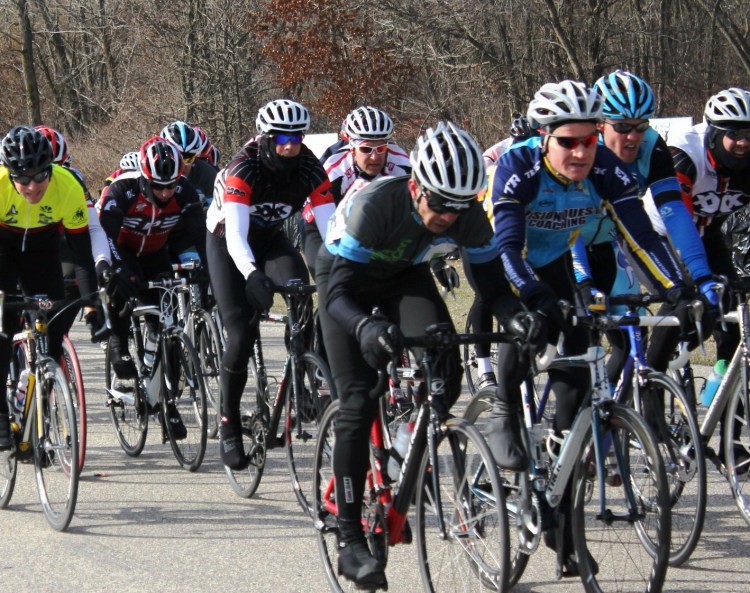 My idea of racing the Barry Roubaix for the first time this year seemed to fizzle out when my potential racing partners ended up with alternate plans.  So, against my better judgement I made a last minute decision to drive down to Illinois for the Super Spring Criterium.

Weather was fantastic… for ice fishing.  24 degrees with occasional flurries and high winds.  Despite the winter freeze, the field for the Masters 4/5 was about 75 strong.  Since it’s actually a car racetrack, the course has about 3 inches of elevation change over a 2 mile loop, and the pavement is as smooth and crack-free as Whitney Houston in the 80’s.

Dennis, bc and I all lined up together and then we were off.  Took a nice easy pace as everyone scoped out each other’s winter fitness or lack thereof.  I’ve been riding outside with bc and the Spokesmen all winter, so the temps were no problem and I settled right in with the early pace.  I have always been a mountain biker, and last year was the first time I ever spent so much time on a road bike.  I’ve always been a cycling fan, and I understand the dynamics of road racing, but my actual racing experience is pretty much limited to drinking PBRs and cheering at the Great Downer race every year. (mmmmm… PBR…)

Everyone stayed fairly cordial until the bell lap, and then you could just sense the nervous energy ramp up to 11.  I stayed close enough to the front to monitor any breaks, but (stupidly) not really close enough to be in them if they did happen.  The pace ramped up throughout the lap but I could tell that no one was really going for it.  Now, hindsight being 20/20 and all, this is where I was supposed to jump, but I just sat there waiting for SOMEONE to go.

Rounding the last corner everyone got on the gas and I heard someone go down HARD right behind me  (medical had to pick him up).  As we headed up to the finish I found a nice open space on the left side of the course and started hammering.  I was making up spaces quicker than I thought I would, and then I heard someone else go down to my right.  That guy knocked someone into me, and I was forced to ride into the grass to stay upright.   By the time I got back onto the pavement, my sprint speed was more like dial-up.

So I rolled across the line in 13th, further testament to what could have been.  I’ve only done 4 road races, but each race I do I get a little more experience and each race I end up wishing I would have just aired it out.