AKA: 14.5 Reasons Riding Bikes 500 Miles Will Make You More Awesome

We would have left earlier if not for a mystery deuce or two.  No idea who was responsible, but I have my suspicions.

This ride is only a success because of the year-long pre-planning that goes into it, specifically from bc and McArdle.  Our first stop was breakfast at Alma’s in Allenton. We were treated to a hot and ready breakfast buffet that would have made your momma cry.  30 or so guys had even made a recon run up to the restaurant 2 weeks earlier to make sure they’d be ready for us.  Unbelievable.

With bellies sufficiently full we rolled on, destined for more food and drink.  Most new guys scoffed at the fact that we all gain weight on this ride, yet post-ride scales generally register 5-6 pounds heavier (I was at almost +7).  Next stop – salted nut rolls and PBR.

Next stop – MEXICAN FOOD!  Roughly 80 miles in is the Oshkosh food stop.  We filled the outdoor seating area and watched a massive amount of planes flying in and out of the EAA.

Parking was somewhat of a premium.

A very different scenario from the 4 random, haggard, unsupported cyclists that found this gem 6 years earlier.  Hey, I think that’s the guy that took a big grumpy at my house before we left!

Alright, this is a bike ride after all.  According to Strava, we covered over 515 miles in 4 days.  We all stared at many a man-ass for hours at a time.  I try to block that part from my mind.

After 137.1 miles we enjoyed a late dinner at Titletown Brewery and crashed relatively early at the Hyatt like the ballers we are.

Day 2 got us up and moving toward Escanaba.  We had a number of bonus stops to make, so we got right to it.  Random roadside bathroom breaks allowed Duwayne to pick up a hitch hiker destined for the border.  He liked our group so much that he stayed on for the whole trip.

There are only 3 guidelines for the Windy 500:

Shortly after we cross into Michigan we stop at our favorite Mexican restaurant: 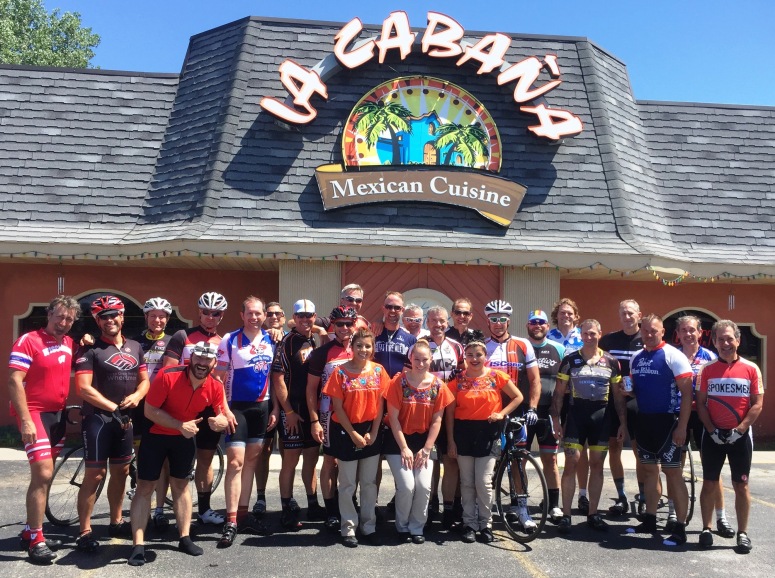 If you haven’t been there, you suck and you should not be allowed to reproduce.

Some day we may figure out that wearing the tightest clothes you have and eating until you can’t breathe, followed by riding bikes in the heat is a terrible idea, but I really hope we don’t.  So, 2 miles later we went to Freddy’s Grandma’s to eat the world’s largest chocolate chip cookies.

Next stop – Bruguglio’s.  Last year we had our only* crash. 2 minutes later the skies opened up and it started to pour.  We were taken in by the kindness of a family at their lake-side cabin, so we decided to stop by again this year and deliver some of those world record cookies.

* yeah, so… crashes.  Only 1 “officially” in all Windy’s combined.  Unless you count the 3-4 solo (stone cold sober) parking lot crashes in 2016.  I can’t explain it.  First Aid was administered to boo-boos and we rolled. 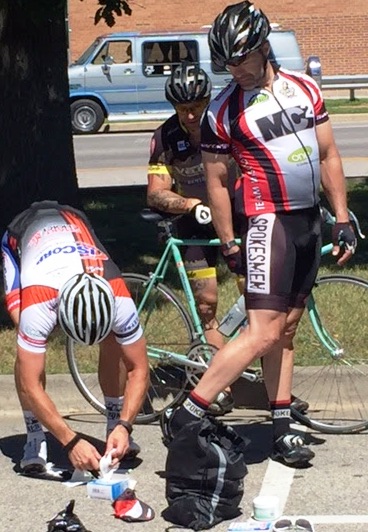 Saturday night we stayed in the dumpiest dump of all, complete with Glade Plug-Ins and a cold-plunge pool that was once a functioning hot tub.  The town shuts down at sunset, so it was pizzas delivered to the conference/breakfast room for dinner.

Early Sunday morning Dr. Long treated a group of us to a very moving outdoor service, while sporting a Ben’s Cycle shirt.  This year’s ride produced so many memorable things that it’s really hard to cram them all in, but this was definitely pretty high on the list.

Did I mention that we also rode bikes?  Blah, blah blah.

We learned a lot along the way:

Lastly – don’t ever be the last guy to use the bathroom, or we’ll move the van and hide behind the gas station when you come out so you think we left without you.

Windy 500 2017 planning has already begun.  It is becoming too amazing to contain.  We may begin limiting spots.  If you want in, raise your hand now or you may be left behind.